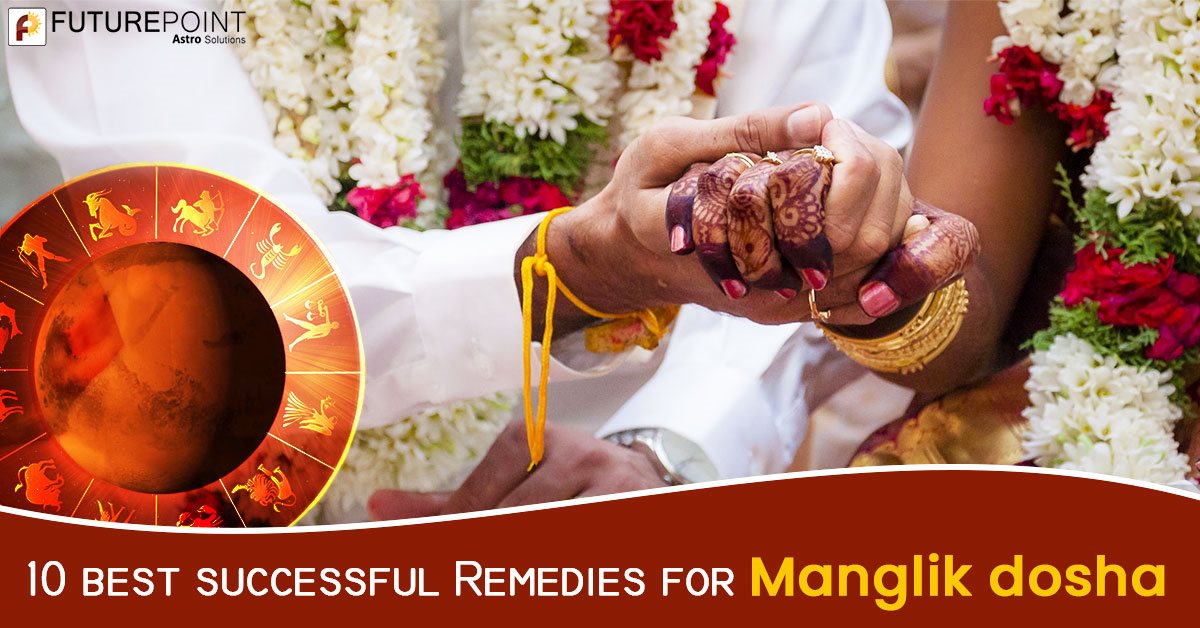 Manglik Dosha is one of the most important dosha analyzed before a couple decides to get married. Manglik Dosha arises with the ill placement of planet Mars in the natal chart of either the bride or the groom or both. First, let us understand how is a Manglik dosha formed in the Kundli to further elaborate on its importance and need to rectify. When the placement of Mars is in the 1st, 2nd, 4th, 7th, 8th or 12th house from the ascendant or from the Moon sign of a native, this dosha is formed. With the placement of Mars in any of the above-mentioned houses, the native suffers from the malefic effects of planet Mars. When neglected, a Manglik Dosha can even turn out to be fatal for either of the partners.

It is one of the most imperative match points, considered while matching two horoscopes. Whilst Kundli Matching Online, both the Horoscopes are matched in order to find the Love Compatibility score, or Guna Milan & Ashtakoot Matching. This makes way for a perfect marriage. However, in many of the cases, the bride or either the groom has an ill-placed planet Mars which causes major troubles in their union.

‘Yogas in Astrology’ That Are Extremely Powerful

10 Life Changing Astrological remedies for Children that every Parent should follow!

We use cookies on our website to give you the most relevant experience by remembering your preferences and repeat visits. By clicking “Accept All”, you consent to the use of ALL the cookies. However, you may visit "Cookie Settings" to provide a controlled consent.
Cookie SettingsAccept All
Manage consent

This website uses cookies to improve your experience while you navigate through the website. Out of these, the cookies that are categorized as necessary are stored on your browser as they are essential for the working of basic functionalities of the website. We also use third-party cookies that help us analyze and understand how you use this website. These cookies will be stored in your browser only with your consent. You also have the option to opt-out of these cookies. But opting out of some of these cookies may affect your browsing experience.
Necessary Always Enabled
Necessary cookies are absolutely essential for the website to function properly. These cookies ensure basic functionalities and security features of the website, anonymously.
Functional
Functional cookies help to perform certain functionalities like sharing the content of the website on social media platforms, collect feedbacks, and other third-party features.
Performance
Performance cookies are used to understand and analyze the key performance indexes of the website which helps in delivering a better user experience for the visitors.
Analytics
Analytical cookies are used to understand how visitors interact with the website. These cookies help provide information on metrics the number of visitors, bounce rate, traffic source, etc.
Advertisement
Advertisement cookies are used to provide visitors with relevant ads and marketing campaigns. These cookies track visitors across websites and collect information to provide customized ads.
Others
Other uncategorized cookies are those that are being analyzed and have not been classified into a category as yet.
SAVE & ACCEPT
×
×

Join our newsletter for offers and updates

Send a WhatsApp Message to AstroResearch